Alexander Porfirievich Borodin worked on his opera “Prince Igor” from 1869 until his death and had not completed the score. The original version of the opera is usually considered to be a chaotic pile of separate pieces. Thou the study of Borodin’s autographs proves that this common opinion is not true, the opera is still known in Rimsky-Korsakov’s and Glazunov’s version. All the productions are based on this version, even if some fragments from Borodin’s manuscripts are included.

93 note manuscripts of “Prince Igor” had been discovered until today in 9 archives of Russia and USA. These sources make possible the reconstruction of the original version of the opera. It differs from Rimsky-Korsakov’s one in composition, words, musical text, orchestration (see examples at the page “Notes”). The reconstruction was initiated by Dmirty Bertman and undertook specially for "Helikon-Opera".

Even the plot of the opera differs in some details. There are several scenes not included even in the fullest version of Mariinsky Theatre. Borodin himself had orchestrated about 40 % of the opera. The original orchestration was brilliant, as it turned out in April of 2011, when the original version was performed for the first time by “Helikon-Opera Theatre” in the Moscow International Performing Arts Centre. Above all, it turned out that Borodin had almost finished “Prince Igor”, and the composition of the opera is coherent.

Both the piano score and the full score of the original version are reconstructed. I am grateful to all my colleagues who helped me with this work. I especially thank the musicologists Marina Rakhmanova and Albrecht Gaub, all the cast of “Helikon-Opera Theatre” and Vladimir Ponkin who conducted the performance.

The piano score is already issued by "Classica-XXI" (Moscow, 2012) with the support of Russian Foundation for Humanities. 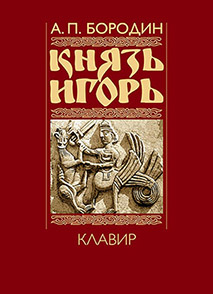 The new production of Perm Opera and Ballet Theatre is partly based on the given edition (in terms of the order of scenes). See: http://permopera.ru/en/

(for the full English transcript see the Youtube page)

"A New Edition of Borodin's Prince Igor", review by Albrecht Gaub, in: Notes, the Qouarterly Journal of the Music Library Association, June 2014, pp. 739-745

The Metropolitan Opera anounced the new production of "Prince Igor" in a new version constructed using a certain "recent reseach that incorporates all the known music and orchestration by Borodin":

And what was really performed in New York? Just the standart version of the opera, edited, recomposed and (re-)orchestrated by Rimsky-Korsakov and Glazunov. All the three Met additions to the opera (Igor's monologue, Galitsky's Revolt, and the River Don Floods passage) follow the so-called "Vilnius version" of the opera, devised by Eugeny Levashev and Yury Fortunatov in 1974. The scene in which maidens come to Galitsky's men was published by Alexander Nefedov from Pavel Lamm's manuscript in 1977.

The article on the original version of "Prince Igor" in German, translated by Pavel Brochin: